The “U.S. Historic 40 Association” was started by Eddie Lang. Known as “Mr. 40”, he has worked toward the goal of honoring and remembering Highway 40. In 1998 he persuaded the California Legislature to designate the remnants of Highway 40, from Reno to San Francisco, as a historic route.

Before the construction of Interstate 80, Highway 40 was the main route from San Francisco, through the Sierra Nevada, eastward. Highway 40 was the second coast-to-coast Transcontinental Highway in the United States and ran 3,338 miles from Harrison and Tenth Street in San Francisco, to Atlantic City, New Jersey. Highway 40 used much ofthe route ofthe country’s first coast-to-coast highway, the Lincoln Highway. Part of Highway 40 ran through Hercules …along what is today San Pablo Ave. 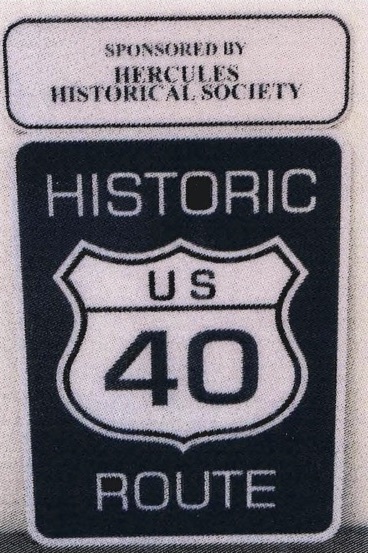 The U.S. Historic 40 Association won Caltrans’ approval for a “Historic US 40 Route” road sign. The Hercules Historical Society learned of this project and its members decided to participate by purchasing and placing 12 signs along the Hercules’ portion of old 40. You will be able to see these signs, which are attached to traffic signal posts along San Pablo Ave. Under each Highway 40 sign is a smaller sign, noting the Hercules Historical Society as the sponsor of the sign.

During the 1930s, ’40s and ’50s, US 40 connected San Francisco with Sacramento, the Gold Country, and the winter resorts of the Sierra Nevada. Then came the Winter Olympics of 1960, at Squaw Valley. US 40 was chopped up, rerouted, paved over, and renamed, as the highway department built a faster, wider, straighter freeway … all with the goal of transporting people to these Olympics. Unlike Highway 40, officials said that the new Interstate 80 never would close in the winter.

“The sad part is that people use Highway 40 everyday and never know it,” Lang has said many times. San Pablo Ave is on 40. So is the Causeway that leads to Davis. Many Sacramento landmarks such as the Tower Bridge, old Sacramento, the Governor’s mansion, and Raley’s Field are along the old 40 route.

Some ofthe other cities that have joined in this project include Vacaville (50 signs), Rocklin (28 signs), Loomis (28 signs), Auburn ( 17 signs), Truckee, Colfax, West Sacramento, and Dixon. There is also a sign in Pinole, just after you enter the city, along San Pablo Ave, southbound. Lang’s plan is to eventually have signs running along the entire route from San Francisco to Reno. It will take more than 2,000 signs to complete the project.

The Hercules Historical Society is proud to have joined this project and hopes the citizens ofHercules will join in and remember Historic U.S. 40.