The Company Town of Hercules 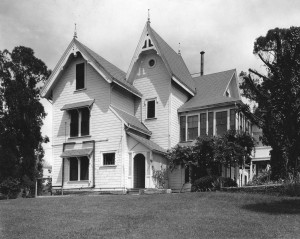 Since it commenced operations in 1881, the principal activity at the Hercules powder works was the manufacture of dynamite and later black powder and TNT. The location was chosen for its isolation from population centers and its access to rail and water transportation. Nearby Pinole and Rodeo were then sparsely settled agricultural areas. Providing residences for workers at the Hercules plant became a practical necessity.

The Gothic-revival home for the assistant superintendent was later converted into the Bachelor's Club.

Chinese workers, who made up the largest part of the Hercules workforce in the 19th century, lived in rough, wooden buildings at the waterfront. These men worked through a labor contractor who also charged the men a fee for lodging and meals. This arrangement continued until 1914, when the waterfront camp was dismantled. Many of the other plant workers lodged at the plant boarding house or one at Pinole.

In the late 1890s, a large home called White Columns was built for the superintendent, as well as 12 cottages for workers and their families. The company-owned village eventually grew to some 100 houses and duplexes. Workers were charged a nominal rent and paid no property taxes. 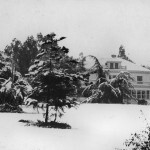 White Columns was built in 1899 for the plant superintendent.

The demand for housing rose and fell according to the level of production orders, but never was the need so great as during spring 1918. The hundreds of workers then hired to build the TNT plant were advised to bring a blanket.

During the build-up related to World War I, additional houses and temporary dormitories were added to the housing stock to accommodate workers. Also, a residential hotel was built to house some 45 to 50 men. 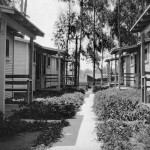 Hercules had the largest population of the company towns in the East Bay. A guide to 1930s California listed its population at 392, while the company town at Oleum was estimated at 217 persons, Selby had 141 residents, and Giant had a population of only 90. Although it had no retail district, Hercules did have a clubhouse, and like the other nearby company towns, it had its own post office and rail depot.

During World War I, these dormitories housed four men to a unit.

At Selby, the American Smelting and Refining Company owned two hotels plus 52 houses at the adjacent village of Tormey where there was a small school. Those employee-rented homes are now gone and the industrial site is paved with a thick layer of asphalt. Oleum, the town at the Union Oil Company refinery between Crockett and Rodeo, once had hotel for men and a few homes for managers, some of which have been relocated to Rodeo. The village of Giant at Point Pinole, owned by a commercial rival to Hercules, had a school, Craftsman-style bungalows, and boarding houses for workers. Most of the surviving buildings in Giant village were torn down in the 1960s. 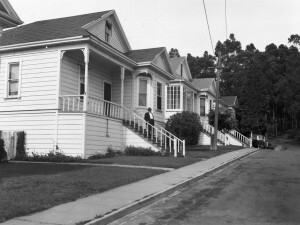 Hercules has undergone many changes. White Columns was dismantled in the aftermath of a huge December 1944 explosion that damaged it and other homes in the Hercules village and shattered windows in nearby towns. All of the dormitories are gone, as well as the hotel. In the 1970s, during the last years of plant operation, many houses were torn down as they became vacant and fell into disrepair.

Workmen's cottages on Pinole Street were among the first company-owned residences built at Hercules.

However, remnants of the company-owned village survive. Several historic dwellings, which have not been rehabilitated, await their next use. These include two former management homes and Quinan Inn, originally a residence for technical employees (now known as the Masonic Hall). A restaurant currently operates in a former company-owned home at 1991 Railroad Avenue that dates from 1917. Today, visitors to Hercules can also see 20 restored workmen’s homes on Bay and Pinole streets. These architecturally and historically significant buildings are listed on the National Register of Historic Places.

More about the first 100 years of the town of Hercules can be found in the recently published history Hercules, which features 219 images of the plant and residential village. It can be purchased here.